What is a Scoliosis? Scoliosis Treatment North Vancouver

Scoliosis is a curvature of the spine that is measures greater than 10 degrees on a radiograph (x-ray). Scoliosis causes the bones of the spine to twist or rotate so that instead of a straight line down the middle of the back the spine looks more like the letter “C” or “S”. Scoliosis curves most commonly occur in the middle back (thoracic spine) but can also occur in the upper and lower parts of the spine. Although it can develop in young children, idiopathic scoliosis most commonly begins during puberty. Scoliosis curves are classified in three ways, based on cause, location and direction. The causal classification system is the most common and includes two major descriptions of scoliosis, identifying them as either structural or non-structural. 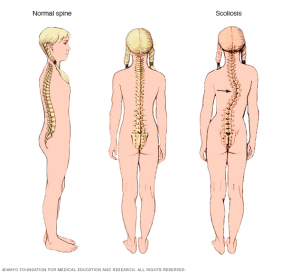 What Causes a Scoliosis?

When classifying scoliosis by cause, there are two major categories, structural and non-structural.

Congenital scoliosis occurs due to anomalies of the vertebrae or ribs that are present from birth. The most frequent anomaly is a hemivertebrae, block vertebrae, spina bifida, bridging, fusion of ribs and other rib malformations.

Neuromuscular scoliosis develops secondary to problems during development of the spine. Often, the bones of the spine will not form completely or they will fail to separate from each other, which results in a curvature. Scoliosis is caused by the alterations in the structure of the spine and may occur with the following conditions: Marfan syndrome, muscular dystrophy, and cerebral palsy.

Curvatures that have no structural alteration and correct have a number of possible causes. If you did not have a curvature as a child or teenager, these are more likely causes of a curvature that develops later in life. These causes may include:

Differences in leg length are common in asymptomatic and low back pain individuals. Many leg length differences have no know cause. The only way to diagnose leg length inequality is via a standing radiograph, which we take at Mountain Health & Performance. Leg length inequality can occur due to trauma (i.e.: broken thigh or leg bones), can be present from birth or can occur due to arthritis, compression fracture, and unlevel pelvis.

During an acute episode of low back pain (facet joint irritation, disc herniation etc.) there may be spasm of muscles on one side, which causes the spine to tilt towards the side of pain. This can cause a compensatory curvature of the spine. 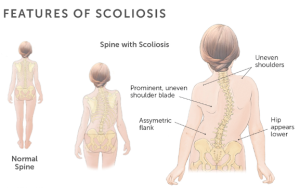 Treatment is based on an examination along with x-ray findings. Approximately 25% of scoliosis will show some degree of progression (worsening of the curve). Factors that increase likelihood of progression include:

For minor curves that are less than 20 degrees, the patient will not require bracing but if they are between the ages of 10-15 years old their curve should be closely monitored for progression. X-rays every 3 months should be done as part of this monitoring process.Curves with the highest change of progression should be braced. Your doctor and chiropractor can help you to determine the severity of your child’s curvature. If the scoliosis causes noticeable deformity or is at high risk of doing so a brace can help to prevent the curve from getting worse. A brace is typically worn until the adolescent has reached skeletal maturity.

If an idiopathic scoliosis continues to progress despite bracing and reaches +40-50 degrees, surgery may be considered. Surgery may involve: spinal fusion along with rods, screws, hooks and or wires placed in the spine. The most common surgery performed includes the insertion of Harrington rods and the Dwyer procedure of wire cable and screws.

A functional scoliosis can be caused by facet joint issues, muscle spasm and disc herniation. If these are the causes of the functional scoliosis then manipulation and mobilization can help to treat the areas of dysfunction and reverse the curvature. The Mountain Health & Performance North Vancouver chiropractor clinic doctors are experienced in the manipulation and mobilization of patients with scoliosis.

Myofascial release can be very helpful for improving posture, flexibility and muscle tension associated with both structural and functional scoliosis. These therapies can also play a huge roll in pain management if scoliosis leads to compensatory patterns that cause pain. The Mountain Health & Performance North Vancouver chiropractor clinic doctors are experienced in myofascial release for scoliosis.

Rehabilitative exercise is an integral part of treatment for all types of scoliosis. Stretching and strengthening both sides of the curve in different ways can help reduce pain, tension and improve strength. The Mountain Health & Performance North Vancouver chiropractor clinic doctors are experienced in rehabilitation for scoliosis.